Etnies and originally a French brand of skateboard shoes founded by brothers Guy & Yvon Rautureau in the heart of Maine & Loire in Cholet. Originally the brand was called Etnics, but the name quickly changed because of a similarity to an already registered trademark. Etnies footwear despite a delicate start on the side of the North American continent, took off thanks to the talented skater Pierre-André Senizergues during the year 1989.

Etnies designed the first real pro-model skate shoe for Natas Kaupas! It was not until the mid-90s to see the brand take off and become successful and become independent from its two original founders.

The Etnies company is a brand of the Sole Technology group whose other brands such as Es footwear, Emerica footwear or even Thirty Tow snowboard make up the group still controlled by Pierre-André Senizergues.

Etnies is above all a large audience of amateur skateboarders, but also multi-sports practitioners, such as FMX enthusiasts with products in collaboration with the Metal Mulisha crew, but also for all BMX practitioners! The Rls model is the fruit of the Etnies x Sheep collab, these are shoes inspired by... She's there ! The most qualitative collab' of skate shoes: Michelin x Etnies , together... Etnies ' Foreland shoes are designed with technical features such as 3M™ Thinsulate™... The Etnies brand presents its Calli Vulc model, these are ideal shoes for... Etnies Veer shoes are super comfortable and resistant thanks to the rubber soles used to... 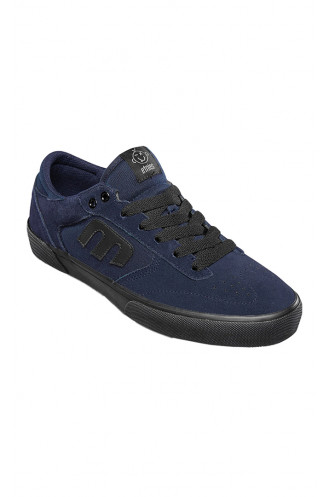 Discover the Windrow Vulc Navy Black model of skate shoes from Etnies that will... The Etnies Joslin is a shoe designed especially for pro skater Chris Joslin himself!...